Have you ever responded to the question, “How are you?” with “I’m fine!” when you’re anything but fine?

If you haven’t, I salute you for being in the very lucky minority!

Manchester Girl Talks: Mental Health was an event aimed at talking about all things mental health, namely, being more honest with our responses to questions such as ‘How are you?’, asking for mental health days, or the process of normalising conversations around mental health.

The panel consisted of Dave Smithson, Anxiety UK’s Operations Director, a user-led organisation of people with lived experience of anxiety, stress and anxiety-based depression, providing information with a varying range of services; Alice Lyons, mental health speaker, Founder and Director of ‘Dark Coffee’, a company advocating for unfiltered conversations around mental health and wellbeing and Debbie Kemp, an advocate for speaking about her mental health via her Instagram (@just_stop_worrying), who has worked previously as a specialist mental health midwife, experiencing anxiety and depression herself pre, during and post-pregnancy.

Sharing personal experiences with mental health can be intimidating, at best, terrifying in general. I’d like to start by commending all of the panellists for speaking candidly and authentically about their own, vastly different experiences.

Dave Smithson described Anxiety UK as the voice of service users, consulting with members through the Anxiety UK magazine to communicate their views. Regarding the barriers faced in terms of the mental health conversation, Dave describes the significant change in the last 2-3 years, specifically the perception of anxiety as being on the ‘acceptable’ end of the mental health spectrum.

Celebrity openness around anxiety, such as Prince Harry and William and the initiatives they are involved in, encourage more people to talk about anxiety.

On the other hand, Dave acknowledges the stigma and fear of being judged that still affects everyone, regarding a fear of telling their employer or their GP, including a fear of their GP telling their boss even though they are not legally allowed to do so. The biggest piece of advice given by Dave was to speak to qualified professionals, seek peer support or even open up to a stranger via social media if that is, surprisingly, what you feel most comfortable doing. 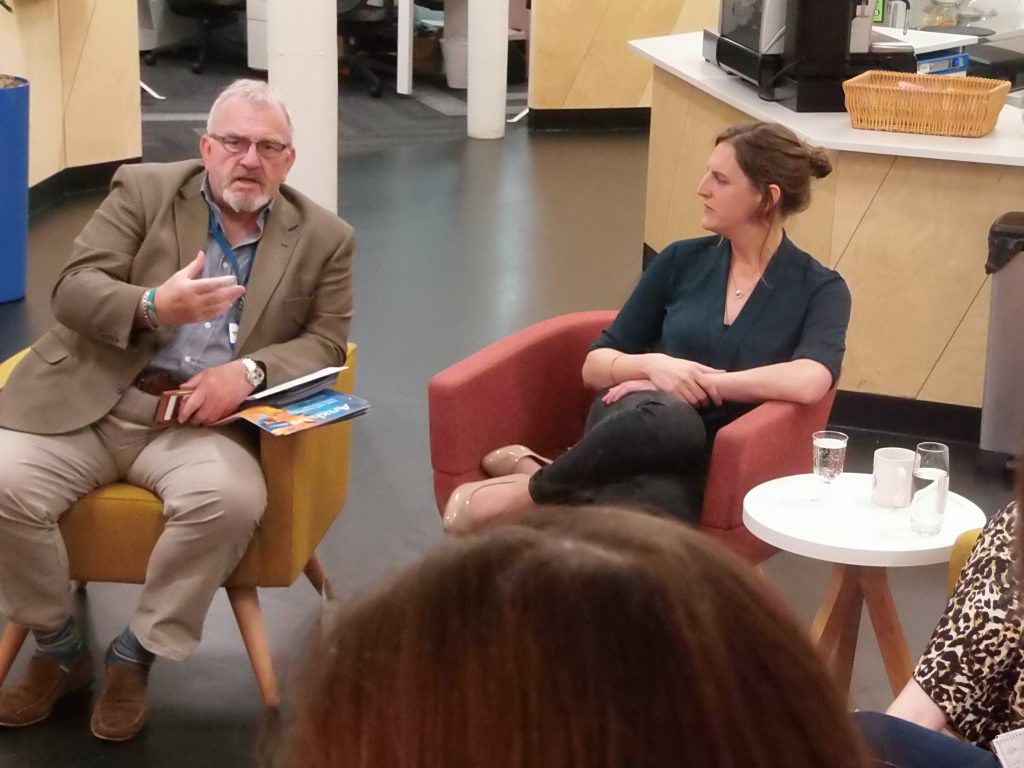 A frequent, and very relevant aspect of the discussion revolved around the fact that in a room entirely full of women, except for Dave Smithson himself, there is still a massive disparity between the amount of conversation being had for men in comparison to women.

Male suicides have consistently, since the mid-1990’s, accounted for three-quarters of all suicides in the UK. From 2017 to 2019 alone, there has been an increase in male suicide, and with a rate of 17.2 per 100,000 in comparison to 5.4 per 100,000 for women in the UK, the disparity is clearer and in more dire need of acknowledgement than ever.

Dave himself spoke of the struggle as a man who’d spent twenty years in the army, an experienced and strong man who has the mantra “I can’t be weak,” ingrained, similar to the attitudes presented with a lot of males, particularly the “We’ve got to be strong!” narrative.

The toxicity of raising boys with phrases such as, ‘Boys don’t cry,’ and ‘You can’t be weak,’ is systematically contributing to stigma around men seeking help and comfort around their mental health at a time when open conversation is most needed.

Normalisation, Alice Lyons’ believes, is what we should aim for. Sitting down with a colleague and speaking about things without a disciplinary element, sitting with friends in a cafe and saying, “Oh, I had suicidal feelings recently,” and being able to hash it out as if it were a normal thing in a public place. As normal as saying that you have a headache, you should be able to say you need a mental health day.

One element touched on by Alice was the polarising binary in the mental health conversation, which is combative, aggressive language on one side (“We have a battle on our hands, we need to fight the stigma!”) and the other end which is fluffier (“We’ll all be okay, we’re fine!!”). The conversation should be somewhere in the middle, honest and candid but also compassionate, combining the two sides so we don’t just exist in those two extremes.

“I’d say the first step isn’t getting people to talk, but having exposure to others that are doing it. I value free content such as my podcast because it’s a good route of information to start self-enquiry.”

Regarding her own experiences, Alice describes how at her most isolated, exposure to content on Youtube and TedTalks allowed a sense of reflection, seeing herself in the content before she realised or acknowledged her isolation herself.

Interestingly, the majority of positive feedback Alice gets from talking about her experiences tends to be from men, who seem to surprise themselves with how much they are willing to share to an open mind and a listening ear, which Alice believes is due to the perception by men that they need permission, almost, to discuss something that is completely normal.

Men in positions of authority, with a certain level of responsibility and high achievers often do need a push to feel like they don’t need to pretend, which is something all panellists agreed on. Dave specifically noted the impact of generational differences on conversations, which lead him and Alice to agree that it was often these older men that could benefit from talking themselves.

And then, Alice followed up the statement, “Based on experience, they’re the ones that when they eventually DO crack…”, with;

(Just to note, Alice Lyons does not actually want to break people, even if she said it with enthusiasm and vigour).

Debbie Kemp was refreshingly open about the barriers faced when trying to tell loved ones about her mental health, in comparison to strangers that she interacts with through her Instagram account. She believes that when opening up on her Instagram can attract people who may recognise themselves in her, creating a small community that promotes honesty around feelings.

Describing the inspiration behind her Instagram name (@just_stop_worrying), Debbie laughs about the number of instances in which people say “Just stop worrying!” to those with anxiety, when that is not at all what anxiety is.

The most poignant part of the discussion was by far Debbie’s thoughts around post and pre-natal depression, as a whole other dimension in which the responsibility for another human is a huge factor in the judgement surrounding women who may struggle to manifest a relationship with their baby. The standard set in the media is, as Debbie says, unachievable after ten hours of labour, next to no sleep and minimal amounts of food.

The ‘Disney-esque’ moment that the media presents is damaging to prospective mothers who may feel immense guilt, such as Debbie did, resulting in feelings of inadequacy or an attempt to completely disregard their own feelings in lieu of judgement from others.

If anything can be taken away from attending the event that I would like to pass on to anyone reading, it’s that the discussion around mental health still has a long way to go. This can only change if we continue talking candidly about it, without judgement and with compassion.

As for what the panellists are currently up to:

Anxiety UK are launching a nutritional anxiety booklet, promoting the importance of diet on mental state.

Alice Lyons has contributed to the fantastic book, ‘The Warrior Wellbeing Toolkit’, available here: https://amzn.to/2parRUk, whilst also continuing on with her Dark Coffee podcasts.

Debbie Kemp can be found on Instagram at @just_stop_worrying, or being a walk leader for Mental Health Mates in Manchester!

😞 I almost didn't go to my graduation because I

😅 Only a psychologist could make a crisis seem

😞 I'm not promising a life of infinite happines

☹️ Feeling glum, chum? As much as it may be d

Ending a week feeling worse than you started it ca